Bipolar disorder, or manic depression, is a mental disorder hallmarked by random and extreme mood changes. These mood swings can disrupt one’s life astronomically by affecting one’s temperament, energy level, motivation, etc. Only 3% of the population suffers with bipolar disorder, and it is believed that both genetic and environmental factors are the cause of the development of this disorder. It is also postulated that these symptoms can be due to a hormonal imbalance. The most well-known symptoms of the disorder include episodes of mania (which cause feelings of intense energy, happiness, impulsiveness and recklessness), and episodes of depression (which cause feelings of hopelessness, sadness, negativity and lack of productivity). These highs and lows can quickly switch from feelings of intense euphoria to suicidal thoughts, can occur sporadically or weekly, and can last from a few hours up to a few months.

The average age of onset for this disorder is 25, although it can develop at a younger age. 83% of these cases are defined “severe,” and can lead to hospitalization. There are two sides of Bipolar Disorder: mania and depression.

The symptoms of these two states can include the following: 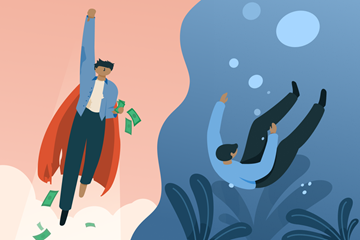 It is unclear what specifically causes the onset of Bipolar Disorder; however, it is known that genetics plays a role in its development. If a family member has the disorder, it is likely that their children will also develop it. Brain scans have also shown subtle differences in size and activation, making professionals believe that there may be some additional environmental factors that play a role in the disorder. Stress is one major component that can throw an individual into a manic or depressive episode. A death in the family, divorce, medical illness, etc. can produce high levels of stress that can alter the brain’s chemical components and cause the development of Bipolar Disorder.

In order to make an accurate diagnosis, an individual will usually undergo a physical exam and interviews by a mental health professional to determine one’s mental state at the time. Blood tests are also often conducted during diagnostic testing to rule out any disorders such as hyperthyroidism, which can often present itself with similar symptoms. Doctors assess symptoms based on the experience of episodes of mania or hypomania.

While making a diagnosis, there are four types of Bipolar Disorder which are taken into consideration.

There are multiple treatments for Bipolar Disorder today. Most common include psychotherapy and medication (mood stabilizers, antipsychotics, antidepressants). Self-management strategies such as exercise and yoga, and health approaches, such as meditation and prayer, are also beneficial habits to help cope with the effects of the disorder.

In the media today, Bipolar Disorder has become less stigmatized and more widely accepted as a hindering but manageable disease. In Tyler Perry’s “The Haves and Have Nots,” the daughter develops the disorder after suffering a very traumatic experience. It quickly cripples her life, until she begins to go attend therapy and begins a medication regimen. This representation demonstrates that although the disorder is serious, it is manageable, and those effected have a chance to live a normal and happy life through proper treatment methods.

Does this sound like you or someone in your life?