What is Panic Disorder?

Have you ever experienced a feeling of impending doom? One so tangible, it tightens your chest and accelerates your heart rate as the anxiety begins to grip every aspect of your life at that very moment?

More than likely, you were experiencing a panic attack.

While this experience was rather unpleasant, it passed, and you probably learned how to deal with that chest-tightening feeling before you spiraled back into another attack.

However, for those with Panic Disorder, the panic attacks are frequent and unpredictable. Panic Disorder is a form of anxiety where an individual has an overwhelming fear of catastrophe or losing control while there is no present threat. The panic attacks that one with this disorder feels can become so tremendous that they begin to have physical affects, some being so great that they mimic that of a heart attack.

Beginning in in late adolescence to early adulthood, 2-3% of Americans struggle with this disorder; it appears to occur more often in women than men. If left untreated, those suffering with this disorder often live in constant dread, wondering when the next attack is going to occur. Most begin to feel ashamed or humiliated over this condition and will begin to distance themselves from friends and loved ones.

As the attacks become more foreboding, the apprehension can become so overwhelming that it prevents individuals from going to work, attending social outings, or even completing simple tasks such as grocery shopping.

While those with Panic Disorder are able to rationalize that the feelings of fear they are experiencing are irrational, they are unable to stop a panic attack once it takes hold.

While Panic Disorder is a form of anxiety, not all persons who struggle with anxiety have Panic Disorder. According to the National Institute of Mental Health, symptoms associated with this particular condition are:

While it is not completely certain why some people with anxiety develop Panic Disorder, a hereditary pattern has been noticed by scientists. It has also been discovered that certain areas of the brain, as well as biological processes, have notable effects on fear and anxiety. While most people can rationalize certain sensations, those with Panic Disorder misconstrue harmless physical sensations as life-threatening, thus throwing the person into an attack. It is also postulated that stress and other environmental factors can play a role in the development of the disorder.

Due to the shame and embarrassment that can accompany Panic Disorder, most who struggle with this condition do not often reach out for help. Nevertheless, the frequent panic attacks and anxiety can be treated by a psychiatrist or psychologist through frequent psychotherapy.

The most effective treatment is Cognitive Behavioral Therapy (CBT). This helps those suffering from frequent panic attacks develop new ways of thinking, behaving, and reacting to those common feelings that cause an attack. Through CBT, the frequency of panic attacks begins to decline, or completely vanish altogether. Before beginning CBT, or other forms of psychotherapy, a doctor might first recommend screening for other preexisting conditions that could present the same physical problems.

Alongside psychotherapy, medication can also be prescribed to help with the anxiety and feelings that trigger frequent panic attacks.

The medications that are often prescribed are:

In movies and television today, it is rather common to see characters plunge into intense episodes of panic attacks, however, to find an example of Panic Disorder is rare.

The popular series “The Sopranos” is an excellent example of the daily struggles that can accompany living with this condition. Main character Tony Soprano battles with the chronic panic attacks that hallmark his disorder. When the attacks begin to envelop his entire being, he clutches his chest and begins breathing rapidly. His equilibrium usually becomes lost and he falls over or passes out. 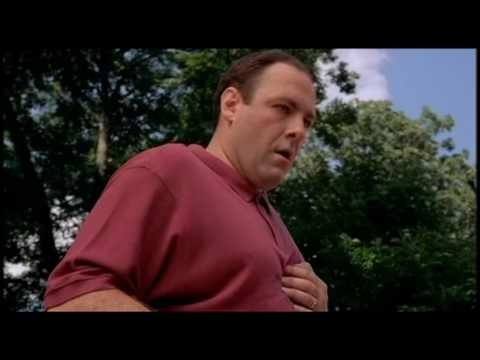 The show greatly captures the frustration that can come with trying to live a normal life and being plunged into a panic attack with no previous indication or stressors present. At the onset of one particular attack, Tony describes the feeling as, “like ginger-ale in my skull.” He often struggles to maintain his composure as his vision blurs and his chest tightens, and he has to find a place to sit down. Friends and family rush to his aid whenever possible, yet despite the challenges this disorder presents in Tony’s life, he is still able to live a relatively normal life. Although at times over-dramatic and action packed, the show does a good job to demonstrate that this disorder does not have to rule one’s life, and there are ways to get past the attacks.